As of Saturday I can finally see shit regardless of what gender I look like! That is to say, I got a new pair of glasses that don't make me look totally like a man, lol.

If you only know me through the internet you probably didn't even know I wear glasses. The fact is I actually wear them basically all the time, but with my old pair I always took them off for photos 'cause I really hated how they made my face look. I'd often take them off when I was presenting female, but carry them with me in case there was something I wanted to look at. It was annoying having to choose between not feeling ugly and being able to see properly.

Well, I shouldn't have that problem anymore, check it out: 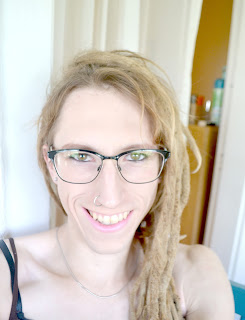 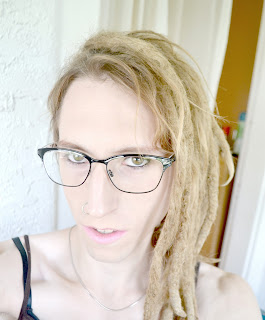 I gotta be honest with you lot, I think I look pretty darn hot in those photos. :P

For comparison's sake, here's how I looked with the old pair: 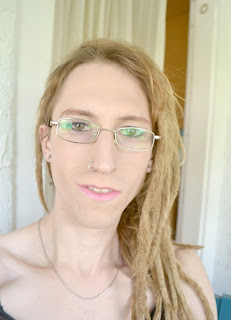 Yeah... it's a big improvement. I'd had that last pair for three years: needless to say I was still trying to be a man when I bought them. (And they did look good on my face in a masculine way when that's how I was presenting myself).

Incidentally, I posted those first two photos on Facebook. It's funny 'cause I'm still not technically 100% out on FB, but I've obviously stopped giving a shit— I mean like my bra strap is showing for goodness sake. It'd be pretty hard to misread all those gender cues.

If I'm going to be that out on FB it brings up the question of why I haven't changed my name on there yet: my account is still under my birth name. I guess the main reason is that I still haven't told my parents that I go by Ashley, and I don't really want them to learn it from Facebook. It's kinda weird that I've been out to mom and dad for well over a year now and, as far as I know, they're still not aware I even have a girl name, let alone what it is. I definitely need to have that conversation with them and probably should have done it already. It just feels weird, like I'm rejecting something they gave me, and so I keep putting it off.

Anyways, that was Saturday. On Sunday afternoon I went to a friend's birthday get-together at a park. There were a few people there I was friends with, one person I'd only met a couple times, and then a whole bunch of people I'd never met before. I went as myself and it was the first time where I was meeting lots of new people and introducing myself as Ashley.

I wore a vaguely hippie-ish skirt and stuck a bow in my hair, which was fun. :)

This event confirmed something for me that I suspected would be the case: that while I am more comfortable around people as a girl than I was as a boy, I am definitely still pretty socially awkward. Sure enough, changing gender does not change me into a confident extrovert who loves meeting new people. I just went from awkward boy to slightly less awkward girl.

But I think that's actually a good thing. The point of transitioning isn't to become someone else, it's just to become yourself. If who I am is awkward and shy around new people, then maybe that's who I should be.
Posted by Ashley W. at 22:06 No comments: