My location on the gender spectrum doesn't really change: I always feel like more of a girl than a boy. However, the strength of that feeling can vary widely. Sometimes my "gendered-ness" is no more than a quiet, nagging whisper: present, but able to be ignored. At those times, presenting as a boy doesn't bother me too much, and I'm able to get on with life. But sometimes, it's a deafening, piercing shout. It drowns out everything else and demands to be heard. And that gets awfully frustrating.

The past four or five days have been really bad. I haven't been able to focus on schoolwork (I had to skip a small assignment) and I've been having trouble paying attention in class. Lately it seems like gender, and my sense of discomfort with my male-ness, is all I can think about.

Sometimes having these gender feelings is like living with a dragon. I have to satisfy the dragon's hunger or it will devour me. So I say to it, "Look gender-dragon, I bought you some frilly pink panties. Now will you leave me alone?" And if it's content with that I can breathe easily for a few days. But soon enough it gets hungry again, and each time it wants more.

The first thing I did when I figured out I was trans was to shave off the scraggily beard I'd been sporting for two years. That in itself brought me a huge sense of relief. Then it was makeup, then clothes, then breastforms, nail polish, shaving my legs.... And it makes me wonder, when will it finally be enough? When I'm out to everyone and can crossdress most of the time I want to? Or will I have to go full-time and change my name? What if it takes electrolysis, HRT and surgery?? Needless to say, I don't want to mess around with those last three if it's at all possible.
I don't know why I have these feelings, but I do know some things I can do to help. As much as I detest it, I should probably get in the habit of shaving every day: that really does seems to make a difference. The same thing goes for wearing makeup, too. I think it's bullshit that our society has decided 20 minutes in front of a mirror each morning is an indispensable part of "feeling like a woman," but whatever: if it helps to assuage my gender stress, it's probably something I should do.

Earlier this month I read the book She's not the Man I Married by Helen Boyd, which, as you can probably tell, is about how her husband's trans-ness has affected their lives. (And come to think of it, that book also uses a dragon as a metaphor for gender, though in a different context). I quite liked it, but I have to admit, at least part of the reason I enjoyed it so much was simply that it allowed me to live vicariously through Helen's husband, Betty, who has been much more able than I to explore and express her own femininity. That's probably not the healthiest way to read a book.

The other reason I liked it was that Helen writes from a very feminist perspective. Before I knew I was trans, I thought I was such a good little feminist because I had no interest in fulfilling a traditional male gender role. I thought to myself, "If I, as a man, would rather stay at home and cook and clean and raise the kids, then I should marry a career-woman." And that was that. But when I learned I was transgender, I started to wonder: what if the reason I want to cook and clean and raise the kids is not that I'm an open-minded man, but simply that I'm a woman?? I was appalled. Had I suddenly gone from defying traditional gender roles to reinforcing them? After that there existed some tension in my mind between feminism and trans-ness. The trans-inclusive feminism in Helen's book helped me to see that being trans doesn't make you a misogynist, and being a feminist doesn't make you a transphobe.
Posted by Ashley W. at 20:35 2 comments:

Being seen and affirmed

Because I've started telling people, I am partially out of the closet. But because I have yet to leave the house as a girl, I suppose I'm still mostly in. Last week I did that thing that seems to be one of the hallmarks of a closeted crossdresser: I got myself all girled up and started snapping photos in my room! Sure, it's a bit silly, but I had a lot of fun with it, so who cares? 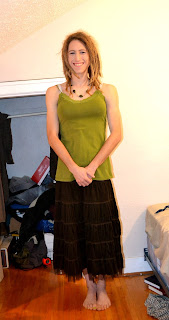 Afterwards I posted a few of the better ones on a crossdressing forum that I occasionally visit. The ladies there are far, far too kind: they all had very lovely things to say and pretty soon I was blushing. I guess compliments make me happy, who knew?

But of course it was about more than just compliments: it was the first time I'd ever really been seen as a girl by anyone, even if it was only over the internet; and their response was an affirmation of who I am. It's surprising how much being seen and affirmed can matter to someone.
I've started school now and it seems to be going well, though it's a little strange being so much older than most of the other students.

There's a "queer social group" on campus called OUTreach. Yesterday was their first meeting of the term, and I forced myself to go. I didn't want to. I knew it would be icebreakers and I hate that sort of thing. Though I love people, I am unfortunately very shy, awkward and anxious when it comes to meeting new ones. But I went anyways.

And it was good. While I was biking over there I kept thinking, man, I'm gonna be the only person there who's not gay. I also kept thinking man, I'm gonna be the only "boy" with painted nails, since I had applied some sparkly blue polish earlier. And while I was right about the nails, there were a couple of other people there who had queer gender identities rather than (or in addition to) queer orientations. So that was cool. Hopefully in the future I will be able to get to know them better: I really need to have people in my life whom I can talk to about this stuff, and who can understand some of what I'm going through.

Overall I'm glad I went. Afterwards though, I couldn't stop thinking about how much I would rather have gone as a girl!
Posted by Ashley W. at 21:49 2 comments: