Gender isn't always at the forefront of my mind, contrary to what you might think from reading this blog. There are times when it matters less. Sometimes, especially if I'm focused on a particular task, I can forget about it altogether. This happened the other day at work. Which, of course, was nice.

The problem is, the song happened to be For Today I am a Boy, by Antony and the Johnsons. And the words I started singing were:

Well... crap. So much for not thinking about it. I was pretty bummed out the rest of the day.

I've got to hand it to Antony Hegarty, though. He* is very good at capturing a certain mournful feeling that can come with living in not-quite-the-right gender.

So... just to balance things out a bit, I'll add that I had a great weekend hanging out with friends and with my brother and sister-in-law. It's not all bad! :)

*He prefers male pronouns, even though he doesn't identify as male.
Posted by Ashley W. at 23:31 2 comments:

Yesterday on Facebook I posted a link to this darling photo and blurb about two Iowa women finally getting married after more than 70 years together. It's pretty darn heart-warming stuff.

I did so knowing that some of the people I'm friends with on Facebook aren't exactly open-minded. I knew it was entirely possible that the comments could devolve into a stupid religious debate about whether or not homosexuality is immoral. But even if that happened I assumed everyone would at least be charitable about it.

But nope. That didn't happen. The charitable part, I mean... 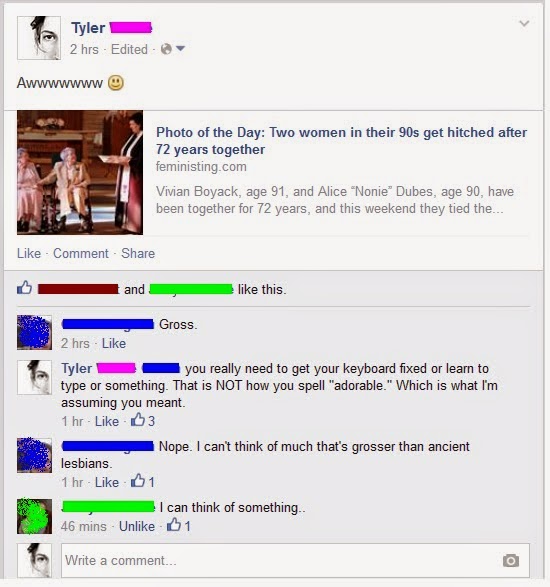 To be honest I was pretty upset about this last night. Remember, this isn't just some random person on the internet; this is someone I know personally.

The tricky thing is, I'm ultimately a recovering bigot myself. So I know that people can change and I know that simply returning insults does nothing to help that process.

And that makes it very hard to know how to reply, or if I even should.
Posted by Ashley W. at 13:40 6 comments:

Okay, before I get to anything else I first have to mention that it actually snowed here this week. The only consolation is that Calgary got more than us. (hehe)


That aside, I am the recipient of a Lovely Blog Award, thanks to Because I'm Fabulous. Thanks, Michelle! :)

I'm supposed to write seven things about myself. So... here goes:

1.
I am very interested in space travel. Okay, actually like, kind of weirdly obsessed with it. For some reason the idea of visiting other worlds has completely captured my imagination. I’ve spent a lot of time reading all about the history of space age, and the great scientists (Tsiolkovsky, Goddard, Oberth, etc.) who helped to bring it in. And I’ve spent a lot of time reading about what its future might look like, too.

Sometimes there is a small amount of sadness that accompanies this interest— I mean, there hasn’t even been a moon landing in my lifetime, it feels like we’re going nowhere! But I can always indulge in hard sci-fi to make up for it.

Suffice it to say, if humans haven’t landed on Mars before the end of my life, I will probably be very disappointed.


2.
I loooooove sushi. If I head ten different lifetimes I could devote to mastering different skills, in one of them I would be a sushi chef. For this lifetime, though, it’s just a hobby. And I still don’t make it nearly as often as I would like.

3.
Music is a hugely important part of my life. Not just listening to it, but playing it, too. I play drums and flute, but what I'm best at is piano. I’ve never had any music lessons (other than voice), I just started mashing keys until it sounded good.

I can sing a bit, too. I hope it doesn’t sound braggy, but one thing I’m quite proud of is my range: I can hit notes as low as Eb2 and as high as A5. I’ve decided that if I do transition, I will continue to use that entire range, even the low notes. I refuse to pretend to be less capable than I actually am just for the sake of passing.

Oh, and I like writing songs. I started doing it when I was 12 and have never really stopped. That adds up to a lot of songs. A small handful of them might even be worth listening to. (And yes, an embarrassingly high number are about space travel).

I don't know of any experience I enjoy more, or find more rewarding, than performing music in front of people.

4.
I don’t play a lot of video games but when I do it’s usually Minecraft. I main Kirby in Super Smash Bros. (deal with it). I tried Dwarf Fortress once but gave up in hopelessness and despair.


5.
I have an intolerance to citric acid. This means that my body doesn’t produce enough of the enzyme it needs to digest it; (this differs from a true allergy, which is an immunological response). Apparently this is a pretty rare condition— yay, I’m special!

So, I can eat small amounts of citric acid (which is good because it's in everything and you need it to live), but I do have to watch how much. Citrus fruits (oranges, lemons, etc.) are completely out of the question. Things like cherries and grapes are okay in very small amounts. Anything with tomato sauce is a bad idea. I definitely can’t drink wine.  :(

6.
I used to be a bad-ass anarchist. This was an extension of the religious views I held at the time. Basically, I saw Jesus’ teachings as requiring absolute non-violence, and I saw the state, the military, and capitalism as inherently violent and therefore needing to be opposed. (I wasn't the only person to get that from Jesus, by the way, Christianity has a long tradition of anarchist thought).

Since then, as I've changed from a believer to a skeptic, I’ve had to move away from the kind of moral absolutism that underlies anarchism. It’s very easy to be an absolutist when you’re basing your beliefs on “the infallible word of God”— much harder when you’re basing them on the entirely falsifiable findings of science.

To be clear, I still care about social justice, I’ve simply de-mythologized it. I now think violence is wrong not because God says so, but simply because it hurts people. (This is an improvement, because, like, there were a lot of things the God I believed in said were wrong that didn't actually hurt anyone.)

7.
I'm not originally from Alberta: I was born and raised in British Columbia, (Canada’s western-most province). It’s been eight years since my family moved here but in a way I still feel like an ex-pat. I am, it seems, a child of the Fraser River, and the forests of Cascadia will always be my home. Oh yeah, and go Canucks!! :)

Okay, I'm sure that was way more than I needed to write. Ayways, the actual rules for the award are as follows:
1. Thank and link back to the person who nominated you.
2. List the rules and display the award.
3. Include seven facts about yourself.
4. Nominate 15 10 some other bloggers and let them know about the award.

Since it's a chain-letter-y type thing, I will add that I'm passing it on obligation free: if you want to take part, go for it. If not, that's totally okay too. :) And so, I hereby nominate:

• An Unexpected Queerdom (although clicking over there her blog seems to be down at the moment...)