I was walking down the street last Sunday. It was getting dark. I was in a sort of androgynous mode, by which I mean I wasn't making any attempt to pass as any particular gender. Like, I was carrying a purse, for example, but only because it's what I keep my wallet and phone in.

A very drunk man stumbled toward me and grumbled out, "Heeey, gorgeous! How are you??"

Okay, casual misogyny. That's a new experience. I looked down and kept walking. As I went past he said, suddenly and loudly, "Hey, wha—? Maaaaaaaan! You're a man!!"

I continued to ignore him, and he wandered off. The whole experience was kind of icky, though— certainly a "transition milestone" I could've done without.

The world's a different place when it sees you, even if only for a moment, as a woman.
Posted by Ashley W. at 21:43 8 comments:

I somewhat outed myself as at least gender non-conforming on Facebook today. I posted a happy status update about "listening to Wintersun and painting my nails". And it felt good to simply express how I was feeling.

Now of course, my gender non-conformity isn't news to anyone who sees me on a regular basis, but there are a lot of people on Facebook that I haven't seen in quite a while. Most of these are friends from the conservative Christian community I was a part of in my "previous life," before I moved to Edmonton. I can't help but think that many among that group might be close-minded about all this gendery stuff.

Wintersun, the band I mentioned, is a heavy metal group from Finland. I listen to fairly wide variety of music genres, but metal is what first got me into music as a teenager, and it will probably always hold a special place in my heart. Lately I've come to appreciate a certain defiant attitude that pervades a lot of metal music: it's the same kind of defiant attitude it takes to go out into the world as a boy with a kick-ass shade of red on your nails.
I was at the mall today— the very big one that Edmonton is sort of famous for. (As a side note, it's kind of weird being from a town whose greatest claim to fame is having a very big mall. Two years ago, when I was in Japan, I found myself chatting chatting with a local fellow who spoke English. When I told him where I was from he said, "Oh, Edmonton! I've been to your mall. It's... very big." What else is there to say?) Even with my red nails, my cute flats, my purse and the quick dash of mascara and I'd applied, I was in boy mode. I wasn't wearing any foundation to cover my beard shadow, and I was flat-chested (as in no bra, just a t-shirt over my ordinary male torso).

When I had to pee I opted for the men's room. I figure that if I'm presenting somewhat ambiguously, the fact that I'm standing at a urinal should tip the scale toward male for anyone present who might be confused. It's always stressful though. I was glad there were lots of people around so I didn't have to worry about getting beat up. When I washed my hands the guy at the sink next to me stared at me the whole time. I was very, very glad to finish up and get out of that gendered space.

Immediately after this I went to buy some souvlaki at the food court. The cashier called me "ma'am." Like three times.

Holy shit, are you serious?

I remembered many years ago, when I was doing a very good job of suppressing my gender, that I used to get taken for female now and then because of my long hippie hair. At the time this bothered me (because, like I said, suppressing my gender), so as soon as I could I grew a hippie beard to go with it. That seemed to convince everyone I was a man. Heck, I nearly convinced myself.

Nowadays, of course, I am generally very happy to be seen as female, because I'm beginning to accept that that's who I am. But in this case it kind of freaked me out. It's stressful when you don't know whether the next person to look at you will see a man or a woman. Or at least it is to me.

What I gained today is an even deeper respect for genderqueer and other non-binary people who present androgynously on a regular basis. Navigating a binary world that doesn't have a category for you is just plain hard sometimes.

(And in case you're wondering, I spent like five minutes taking pictures of my fist and another ten messing around in GIMP to produce the illustration for this post. I am far too easily side-tracked, it seems.)
Posted by Ashley W. at 23:45 2 comments: 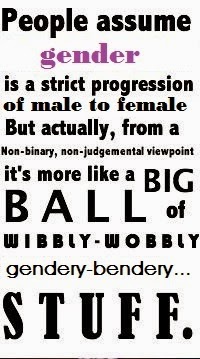 That's just something I came across on the interwebs recently and wanted to share. I thought Michelle (who reads this blog) and Jeremy might appreciate it, among others.

For those of you who don't watch Doctor Who, or at least haven't seen season 3 yet, it's referencing the Doctor's wonderfully unhelpful explanation of how time works. The episode in question, Blink, also just happens to be my favourite Who episode of all time. (Though I still have a couple seasons of Matt Smith to watch before I'm all caught up.)

The original line is clearly the writers' way of telling the fans "don't bother trying to figure out how time works in this show; you just have to trust us when we tell you the Doctor can't cross his own timeline and stuff." And of course, that's often how gender is, too. Ultimately, we kind of just have to take people's word for it that they experience it the way they do.
Posted by Ashley W. at 11:41 1 comment: