Guess who attended the Pride parade with her friends last Saturday? Me!

And I mean the actual me, not the boy I pretend to be sometimes. That's kind of a big deal: this was the first time I've gone out and done something fun with my friends while presenting myself as a woman.

I had been quite certain for some time before that I was going to this thing and that I was going as myself. Of all places, being at Pride in the wrong gender would be absolutely heartbreaking. I just wasn't sure if I'd be able to find anyone to go with, but as it approached some friends of mine sounded interested and we made plans to meet there.

The night before I painted my nails in the colours of the transgender pride flag. I actually had to look up on the internet what order the colours go in, lol.
Then Saturday morning I woke up and set about choosing an outfit. Part of me wanted to wear something a little slutty, since, you know, the whole "I never got the chance to be a teenager" thing that trans women always say, and Pride's the kind of place where that wouldn't be inappropriate. But since this was going to be the first time some of my friends would be seeing me as a girl, and since I wanted that to seem reasonably normal to them, I opted for a more ordinary outfit: a long brown skirt, a stripey purple top layered over a brown camisole, and my cute black flats. Once I got there part of me wished I had dressed a little more queerly, but I'm sure there will be other opportunities for that.

The parade route was only two blocks from my house. I walked there and, with a bit of texting back and forth, managed to find my friends. I was meeting four people there: only one of them had I had a proper coming out talk with (and that was back when I still identified as a crossdresser), another one I was confident knew I dressed as a girl sometimes but we'd never specifically discussed it, the other two I didn't know how much they knew or guessed. But when I got there, no one even batted an eye at my presentation, like it was so normal it wasn't even worth mentioning. Which was the best possible response, as far as I'm concerned.

I may not be "officially" out to very many people, but I make basically no effort to keep my identity a secret, so I guess it wasn't much of a surprise. Plus, my friends are all pretty open-minded to begin with. I am so grateful to live in a time and place where I can just be myself without necessarily having to worry about all the logistics of coming out beforehand. As great as that is though, I still hope to come out to these folks pretty soon: they've seen me dressed as a girl, they may as well know I identify as one too. I'm sure they won't be surprised then, either.

The parade itself was pretty cool, although I didn't manage to get any good photos. The Society of Edmonton Atheists had a giant Flying Spaghetti Monster and signs that read "Smile, there is no hell!" It got pretty quiet when they went by so, being the non-believer that I am, I made sure to cheer extra loud. (Of course atheism has nothing specifically to do with Pride, but neither do any of the many churches and other religious groups that were also represented, so I think it was okay).

After the parade the whole festival moved to a nearby park where they had like entertainers and food vendors and all that stuff. We walked there and got some lunch. Wearing layers and a long heavy skirt turned out to be a bad idea: it got up to 27°C (81°F) and I was sweating like crazy. But it was still a lot of fun hanging out there. 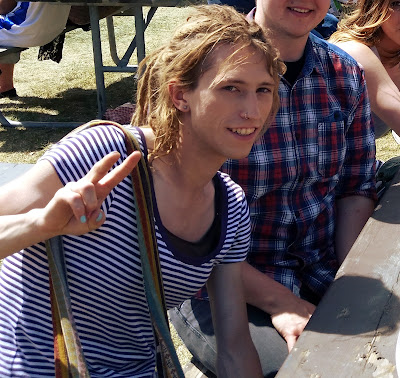 The un-cropped version of that photo is the five of us sitting at a picnic table— (I don't want to tell everyone about this blog just yet, so I had no way to ask if I could put their faces on it). The next day I kept going back and looking at it almost in amazement, like Wow, that's actually me, just hanging out with people like it's no big deal.

Afterwards three of us walked back to my house (well okay, one of those guys is my roommate, so his house too) and watched the soccer match between Canada and China, which was actually taking place right here in Edmonton, which seems crazy to me, but whatever. By that point the clothes I'd worn had become pretty uncomfortable, what with the heat and the fact that my push-up bra was digging into my sternum— (it works fine when I wear actual breast forms, but because those would've shown over my neckline I'd settled for balled-up socks this time)— so I changed into a lighter skirt and t-shirt and a more comfortable bra. Had a couple beers, grilled some veggie hotdogs, enjoyed the beautiful weather...

Later in the evening we met back up with the other two people we'd been at the parade with, plus two friends of theirs I hadn't met before, and we ended up all going out to a bar and dancing. Here's the thing though: by then it was late, I hadn't shaved since the morning, and that fact was becoming pretty obvious. I really didn't want to go as a beardy girl, so I had to make a quick decision between switching to boy mode and going with them or spending however much time it would take to shave and redo my makeup and then meeting everyone else there. I wasn't even sure where we were going, so I chose the first option.

And like, dancing's still fun, even in the wrong gender, but I felt weird about it. You see, there was this girl I met there, and I danced with her for a good chunk of the evening. After a few songs she and I were dancing together in a manner that was, like, fairly sexualized. And on the one hand, it's a positive thing that I'm finally starting to feel comfortable expressing my sexuality: between my gender stuff and the conservative Christianity I practiced for so long, I've had a shit ton of issues to deal with to get to the point where I can do something like that; (granted, I've still never actually had sex with anyone, but I'll get there eventually). But afterwards I realized: she obviously thought I was a boy 'cause that's how I was presenting, she's most likely straight, and she probably would not have been into that at all if she'd known I was actually a girl. Ick. It made me feel really gross, like I'd deceived her.

I don't want to do that again. What I do want now is to go out dancing as a girl, and preferably at a queer venue where I can meet queer girls. That's like, on my list of things to do now.

Still, in spite of that little hiccup at the end there, overall it was a fantastic day. Definitely can't wait until I get to just be me all the time. :D
Posted by Ashley W. at 17:53 3 comments:

Oh dear, I've sort of been neglecting this blog lately, but I've got a bunch of different things I want to write about so hopefully I'll be getting back into it.

Let's start with my ears— specifically that I got them pierced last weekend! That's something I've been meaning to do for ages and only just now finally got around to, and I'm very happy with how they look. :)


The actual piercing didn't really hurt much, but at the end of day, once I'd kind of forgotten about the new bits of metal in my head, I carelessly took my shirt off and was like OHGODWHY...

I guess pierced ears aren't really a gender thing per se: lots of boys have them and lots of girls don't, and even before I began questioning my gender I'd considered getting it done. But they do give me the option of sticking feminine jewelry in there, which is just one more cue I can use to help people read my gender correctly, so that's nice.

On an unrelated note, I just finished reading Nevada by Imogen Binnie and I absolutely loved it. Like seriously, if you want to read a novel with realistic, complicated trans characters, you should check this book out.
Posted by Ashley W. at 22:42 2 comments: